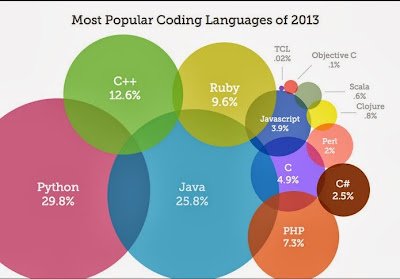 SOFTWARE DEVELOPMENT
DAW M5 UF1 Programming languages
WARM-UP ACTIVITIES
Coment the origen of the words described in:
http://www.theguardian.com/books/2013/apr/17/tom-chatfield-top-10-internet-neologisms
A1 PROGRAMMING LANGUAGES IS LIKE A BOX OF CHOCOLATES. WHICH ONE?
Aim
In this activity you will debate the use of programming languages around the world.
Description
Type on your browser the following URL:
http://www.google.es/trends/?q=php,+.net,+java,+phyton,+ruby,+perl&ctab=0&geo=all&date=ytd&sort=0

A2 OPEN OR GATED COMMUNITY
Aim
In this activity you will debate the choice between .NET and Java, reading an opinion of a programmer.
Description

Strips of paper given to students:

A3 MATCH THE PAIRS
Aim
In this activity you will learn to identify and classify programming languages.
Description
You will be given:
Your goal is:
Key words and phrases
Supplementary materials PROGRAMMING LANGUAGES
Strips of paper given to students:

A4 A BIT OF HISTORY
Aim
In this activity you will learn to both classify programming languages and recognize their features.
Description
In teams of 3 people, prepare a "presentation" in English language with any APP included in the Prezzi shown in class (http://prezi.com/vjtkw2xthf1e/english-vocation/ share_embed). PowerPoint, Impress, PDF or other text documents will not be accepted. A comprehensive list of these APP's may be also found in the document ListofFunnyAPPs.odt. A good example is: http://www.dipity.com/. Thanks to this APP, digital time lines can be described and processes can be explained along history:

Another useful document given to you may be: EvolutionofProgrammingLanguages.pdf
You are expected to present your work in front of the class in English language. Your presentation should not be longer than 10 minutes, taking into account that all of you have to speak. Each team will be assigned a decade. The "presentation" shall include:
A5 CURVE LEARNING
Aim
In this activity you will compare learning curves of programming languages.
Description
Search on the Internet the programming languages which have the shortest and longest learning curve.
A look at http://en.wikipedia.org/wiki/Comparison_of_programming_languages might be helpful.

A5 MICROSOFT INTERMEDIATE LANGUAGE
Aim
In this activity you will generate the same object code from two different source code languages: C# and VB. Thus, we will understand the mechanism of the Microsoft Intermediate Language.
Description

Move your code to the folder is just opened and compile it with:

Where vbc is the compiler of Visual Basic. If you find any problem about permissions, try to open the Visual Studio.NET Command Prompt as an Administrator.

A file hello.exe should have been generated. Test it, the word "Hello" should appear in the console.

To compile it, use the following command:

When you execute it with hello2.exe, the result should be the same as before.We are now going to "decompile" the two codes to check whether the MSIL code (Microsoft Intermediate Language) is the same for both source codes. For each of them execute he following command:

Compare the two Main functions. They should be the same.
A6 SUM IT UP!
Use the Website https://bubbl.us/ to summarize all you have learned. Work in pairs and upload your mind map to the forum in Moodle. Compare yours to the others.
Un saludo y muchas gracias
Olga Schlüter
Publicado por Formación en Red INTEF en 16:44